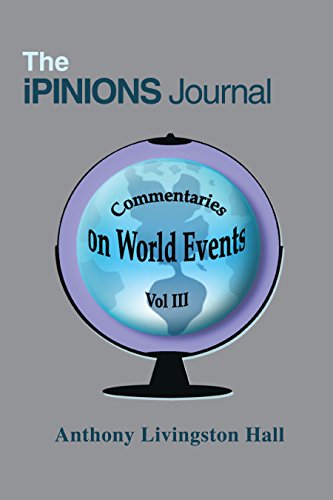 ANTHONY LIVINGSTON HALL COMMENTS ON: Bush's legacy of support for Africa: "I was dismayed by the number of people who refused to believe that Bush had done more for Africa than any other US president; notwithstanding testimonials I proffered from renowned crusaders for African development (like Sir Bob Geldof and Bono) to support this claim." Oprah's school for African girls: "I applaud Oprah for founding this school for the same reason I applauded Madonna for adopting that African boy: She is fulfilling a need which honors our shared humanity in a way that few of us can afford, or are even conscientious enough, to do." Native Americans ethnically cleansing blacks from their tribes: "Indeed, I do marvel at this curious thing: that they would rather be condemned as racists for expelling blacks than be criticized as niggards for hording their gambling loot." French President Nicolas Sarkozy's love affair with the US "Sarkozy displays a Blairite affinity for America that any self-respecting Frenchman must find particularly gaulling." Bungled terrorist attacks in London and Glasgow: "Wannabe suicide bombers rammed their jeep packed with explosives into Glasgow Airport on Saturday morning shouting "Allah, Allah, Allah"-no doubt hoping to go off in a blaze of glory for eternal assignations with their apocryphal 72 virgins." Steroids in baseball: "In fact, steroid use has flourished in baseball (and other professional sports) pursuant to an open conspiracy among players and team owners to feed the gladiatorial lust of fans who want to see bigger, stronger and faster cyborgs perform for their atavistic enjoyment."